Journal of Economic Research is an open-access, double-blind, peer-reviewed journal published by Allameh Tabataba’i University, the leading university in Humanities and Social Sciences in Iran. Journal of Economic Research has been established to provide an intellectual platform for national and international researchers working on issues related to economics. The Journal was founded in as a response to quick advancements in economics and was dedicated to the publication of highest-quality research studies that report findings on issues of great concern to the profession of economics.

To allow for easy and worldwide access to the most updated research findings, the journal is set to be an open-access journal. The journal charges two million Rials to compensate a part of the arbitration fee, and if the article is accepted, additonally four million Rials will be charged from the authors for a part of the costs of processing the articles, the rest of the costs will be financially supported by Allameh Tabatabai University.

The journal is published in both a print version and an online version.

Welfare Effects of Economic Sanctions :The Case of Iran

The Impact of Energy Security on the Economic Growth

The concept and measurement of economic Resilience

Study of Correlation between Volatility of Stock, Exchange and Gold Coin Markets in Iran with DCC-GARCH Model 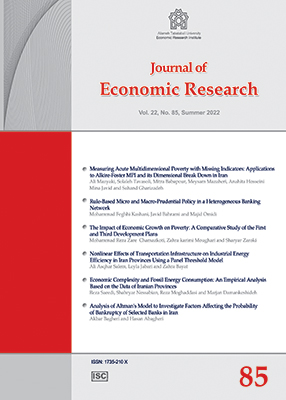 Ministry of Science, Research and Technology